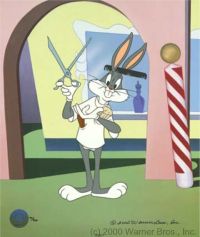 I normally love haircut day. The Hubster always looks hot with a nice short do. He owns his own clipper set and has been cutting his own hair pretty much since we got married. He’s quite good at it, he usually does the whole thing, then I just fix up the back. We’re a good hair team. Now, he’s been bugging me for some time to try and cut it all by myself. I’ve been trying to avoid it because he’s a little particular about the style of the cut. However, this morning he talked me into it. Eek. Haha… first of all, I was terrified and took almost 45 minutes to do it because I was so nervous. But I cut cut cut… so, we finished most of it, then it came to the front. I cut that too… then he looked in the mirror and I realized I had cut too much!!! We put some gel in, he straightened out some uneven areas, and now my hubs has a nice short haircut. Oh man… haha… I LOVE his hair short, but I think he’s a little unsure about it. I feel kind of bad, I was so nervous to do it to begin with. Mind you, he’s such a good hubs that he’s been telling me all day that he likes it… :)

As much as I love when he cuts his hair, I’m usually a nervous wreck about cutting my own. I don’t really have a ‘regular’ stylist, and usually end up wherever’s cheap (oh, the life of a student). I’m not really THAT fussy, so long as it’s fun and nicely done, I’m usually happy. I have a friend who works as a hairdresser, [Hair Girl], and she knows me well enough to cut my hair to almost exactly what I ask.

However, the last time I went for a cut she was away, so I ended up going to this new place that was offering this incredibly priced deal for a dye and cut. I was supposed to be with a girl who was young, but had some experience, but last minute she called in sick, and unbeknowst to me, ended up with a brand-spankin’ new girl. Spart was with me, and I think her haircut turned out fabulously… so maybe this girl just didn’t like me! She did a really good job on the dye, but she absolutely butchered my cut. The thing is, I didn’t even realize how bad it was until the next day. Because I had been in the salon for so long between my dye job, and Spart and my cuts, I left with my hair wet and just threw it up in a pony tail. Never again.

The next day I woke up and went to do my hair. First of all, I straightened it, and when I took a look at the back, it looked like I had a claw of hair that was almost and inch longer than the rest. Then I tried lining up my front, and realized that one side was about a half inch longer than the other. My bangs were butchered and my layers looked like huge chunks. Iiiiiiii was devastated. Haha… my handy hubby came to the rescue and cleaned up the back as best he could, and I tried to fix my bangs. Because we live in a different city from where I cut my hair, I couldn’t even go back and demand they fix it. So now, 2 months and 15 (or so) self-made cuts later, I am almost happy with my hair. I’m just hanging on until Christmas when I can go see Hair Girl and hope she can fix me because at this point I don’t trust anyone else. It’s really quite sad. :( *sigh*

A good friend of mine just chopped off ALL her hair. I mean all of it. It looks like it’s less than an inch short. I’ve thought about it a lot… I almost did it once– but I was too afraid to go any shorter than my chin line, and that’s the shortest it’s ever been. She’s just much braver than me… and she even cut it herself! I’ll call her [Brave Girl], because I think she’s awesome. xo

Anyway, I can’t believe I just wrote a full entry about hair. I guess I’m just THAT good. haha