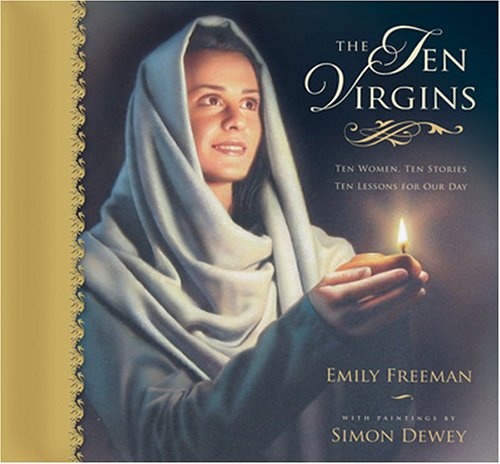 This is a post that has absolutely nothing to do with my new house.

Yesterday was a very special day for me. I think I mentioned previously that I had been rehearsing for a small musical I was in. It was a production based on the parable of The 10 Virgins:

Beautiful words and music give an identity and an individual story to each of the Ten Virgins. Each possesses a positive quality or virtue that could be wisely developed. But as their stories unfold, the struggles of their daily lives present each woman with choices that determine her path.

Will she prepare herself with lamps trimmed and burning when the Bridegroom comes? Or will she procrastinate and find herself left outside and alone?

With a stirring blend of songs, scripture, and narration, this musical program based on the well-known parable allows readers to relate to the actions and motives of the Ten Virgins. (source)

I played the character of Nava: “A woman who diligently prepares”–a young virgin who forgets to bring extra oil on the eve of the wedding. It wasn’t an enormous role, but I had a few lines to memorize and a solo to learn.

We had a dress rehearsal and sound check on Friday night, and I have to be honest–I was a little worried. I had trouble remembering my lines, I wasn’t sure how to move on stage, and I was just generally getting lost in the technical aspects of the performance. It ended up being a bit of a late night, and I went home feeling less than confident about the performance the next day.

Something changed on Friday night. When I woke up on Saturday, I somehow got out of my head and let go of the details and my focus shifted to the message of my part, and not the perfection of my lines. I rehearsed a little in the morning, and by the time I was in my outfit and make-up, I wasn’t at all nervous, even though I think there were approximately 200 women in the audience.

It wasn’t a perfect performance, but it was just… magical. Everyone did so well, and the audience really seemed to connect well to the characters and message of the play. It was almost funny, when I was first asked to be a part of the production, I didn’t understand why I had been selected for this character. I didn’t feel like I related with Nava at all.

…but by the end, I realized that her story was so me, and I’m actually really sad that it’s all over.

There was so much I loved about being a part of this–for one, it felt so good to perform again. I forgot how much I loved to sing and perform and just be involved with a production like this. I felt like it woke up a piece of me that has been sleeping for so, so long.

I also loved the other women I performed with. Our little cast of 11 (+ 1 amazing director) was packed with phenomenal, vibrant women. As we didn’t really have many rehearsals as a group, I never really expected such strong connections to form between us, especially as many of us didn’t really know each other when it began. But when we said goodbye yesterday, I was actually really disappointed that it was ending and that I would no longer have the same opportunities to see everyone on a regular basis.

Lastly, I loved the spirit and message of this production. In our rehearsal before the big day, our director made a comment to us that really made me stop and think. I’m paraphrasing badly, but it was essentially that our goal was not to entertain the audience, it was to inspire.

I can’t speak for anyone in the audience, but I know that being involved with this production inspired me. At the end of the musical, when my character realizes that she has not brought enough oil to light her lamp for the bridegroom, she is devastated. She has tried so hard to be the best she can be and diligently prepare for this momentous event, but she just… forgets. She falls to the floor weeping when she realizes that she won’t be a part of the wedding.

I feel that way sometimes… like I’m stretching myself so far in so many directions trying to be the best I can be, that I forget to hold onto some of the most important things. That what I do isn’t enough–that I’m not enough.

Becoming Nava for those few months has inspired me to focus on what’s really important and just… let go of everything else.

Anyway. I wish I could have captured it on video for you, but you’ll have to make do with my scattered thoughts and descriptions.

…and photos! Our wonderful director put together a smilebox for us with some photos from our rehearsal and performance. You’ll see I’m wearing my glasses in some of them, and insane make-up in the others. Any guesses about which ones are rehearsals and which are performance pictures? haha

Here are some of my favs: (you can click on them to enlarge the photos)

You can see all the photos here:

The Ten Virgins: A Musical Parable