When I was 13, my mom told me it was time to stop trick or treating. At the time I was devastated… how on earth could I survive November without a pillow case of candy hidden in my closet? Sad, I know.

Eventually I got over being the voluntold candy-hander-outer and for years Halloween wasn’t really a big deal. I learned that sneaking candy out of the family’s candy bowl was kinda fun and I didn’t really need all the dress-up stuff, and didn’t bother dressing up until my first year of university (on the night the Hubster and I first saw each other!) and I became the “Lady bug Girl”. 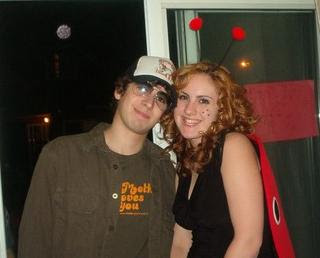 Since that time, I haven’t really bothered with Halloween, and if it weren’t for all the decorations that adorn store windows I’d probably completely forget about it… in fact, the first year the Hubs and I were married, I did. haha! He had to work that night so I was alone in our apartment and as soon as it got dark out I kept getting these sporadic knocks on my front door. Having seen entirely too many episodes of CSI (I hadn’t fallen in love with Law & Order: SVU yet) I was convinced it was a serial killer coming to take my life. (*sigh* I know…)

After the 5th knock or so, I crept to the door and yelled “WHO ARE YOU?!” through the door in a panicky voice (trying to sound brave. and tough.). Preparing to hear Vincent Price’s laugh in Thriller I was a might set back when I heard two timid, tiny voices cry, “Trick-or-treat?!” in utter confusion. Unable to muster the courage to face their parents and tell them I was convinced their children were serial killers, I collapsed on the floor in relief shame and told them I didn’t have any candy. Through the door. Which was locked. And bolted.

I think the Hubster laughed for an hour when I told him later that night.

Halloween and I aren’t really great friends. I think it’ll probably be more exciting when we have children of our own and candy to steal inspect for danger, but until then, forget costumes and candy–I have a whole new use for Halloween: SHOPPING. Seriously. Shopping on Halloween night when everyone is out trick or treating is magical. It’s SUCH a well-kept secret! I had to work until 7:30 last night, then the Hubster and I had to run some errands. I normally loathe shopping at Walmart due to the utter chaos that is always inevitably waiting when you walk through the front doors, but last night it was… peaceful. We were able to get in, grab everything we needed and get out in record time. No line-ups. No screaming children. No mess. No fuss. Love.

It was the same at the grocery store… I think it shall be my new Halloween tradition. Next year I’ll try the mall and let you know how it goes. Be excited.

We did try and honor the spirit of Halloween by renting a horror-ish movie to watch last night. I don’t really “do” scary movies as hey, let’s be honest, my imagination is HUGE. HUGE. And that stuff stays with me for days after I watch it. For example: the first time the Hubster introduced me to the Alien movies I was so scared I made him stay up until 3am watching Bambi with me afterward so I wouldn’t dream about having my face sucked off.

However, I wanted to try. I’ve been trying to make peace with scary movies lately by trying to watch more of them. In the past year I’ve watched The Shining, The Strangers, and then last night, The Exorcism of Emily Rose. To my surprise, I didn’t have to cover my face nearly as often as I thought I would, and I actually really liked the storyline. However, the Hubs has been informed that if I ever, ever wake up at 3am he will be joining me. Now that’s love. :)

We also had a good laugh remembering our trick-or-treating days after I saw a very tiny, very cute ballerina prance past our car. After fondly recalling at the best / worst treats (who gives out pop?! I mean really. Way to drag a kid down. haha) we started talking about some of the funniest / most bizarre ones we ever received. There were always a few homemade ones that made their way into my pillow cases, as well as the treats meant to “inform” the children, like toothpaste or pencils.

However, we each had a winner… when the Hubs was little he was given Dairy Queen coupons instead of candy. I’m sorry, but unless you are handing me an actual blizzard, then I’ll just take a Reeces cup, please. :)

My all-time favourite was the year I got 5 lucky pennies–not just any pennies, lucky ones–from a cute little old lady that lived up the street from my old house. Sad as I was not to add to my ever-growing chocolate collection, I kept those babies for ever. Or at least for a day. You know.

Did you ever get an weird / funny / interesting treats as a kid? I sometimes think I want to be that person who gives out bizarre things on Halloween just to give people funny stories. The Hubster’s suggestion was to give out squares of toilet paper (we had just restocked at Walmart. ha).

…or maybe I’ll just give out suckers. haha

So lovelies, that was our little Halloween… and now on to Christmas! WOO WOO! Fifty-four sleeps!