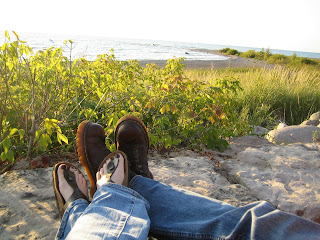 The Hubster and I went on a bit of an impromptu vacation combining business with leisure this week. After meeting my new little niece (Pea) on Sunday, we hopped in the car and drove to the beautiful boonies. The Hubs was there for business, and as I had some free time I decided to tag along. It actually worked out perfectly as I had a friend from high school who lived nearby who had the week off and we got to see each other after nearly 2 years.

It was a teeny, tiny little town, much like where I grew up in the Great White North, but it was a bit of a shock to the Hubster’s system. He grew up in the City and has lived in cities for his entire life–living in Senior’s City was like the country for him and it had a population of over 70 000. haha! So driving into a little place of maaaaaaaybe 2000 people was a new experience for him.

The town itself was breathtakingly beautiful… it was right on a waterfront with a beautiful beach (those are our feet watching the sunset). As the Hubster acclimatized himself to small-town living I started a list of “identifiers” that tell you you’re in a small town. Here’s what I found:

You know you’re in a small town when….

–People are nice. Seriously. Not that people aren’t nice, or can’t be nice in cities, it’s just a different kind of nice. A wholesome, genuine nice. People really like you. haha

–People drive slowly. This was a bit harder for the Hubster who is more used to driving in cities where everyone is in a rush. Here everyone drove like they were 90 to enjoy the pretty scenery.

–Cars stop to talk in middle of road. I saw two people driving in opposite directions (going slowly, of course) stop on the road, roll down their windows and chat for a minute to continue on their way. In the City this could get you killed. haha

–Everything closes at 6pm. Well, that’s not entirely true… Walmart was open to a whopping 9pm! haha! This was a bit frustrating as the Hubs had to work all day so everything we wanted to do was closed by the time he got home. C’est la vie!

–No chain restaurant or stores. Most of the shops and restaurants were owned by locals, except for one Tim Horton’s right on the edge of town, and even that was

–Businesses were located in old houses. Unlike the city where glass, concrete and steel make up the “modern” look of business, here restaurants and stores were found in large, old homes or buildings that had been converted.

–The veranda reigns supreme. Nearly every home had one. LOVE it.

–Canadian Tire is size of a City McDonalds. We couldn’t believe how tiny it was! It was easily a quarter of the size of the ones found where you live.

–Trucks. Lots and lots of trucks.

–The big company for whom 90% of the population works has a skidoo parking lot.

–Farms. Lots and lots of farms. (It was very pretty!)

–Mennonites! I was reeeeally excited to see Mennonites after my obsession with reading books about the Amish and Mennonites last winter. I didn’t see a horse and buggy though, but apparently they are out and about from time to time!

–People regularly shop at markets. I went to three different ones while I was there!

–There was a CORN MAZE. I didn’t get to go, but it sounded SO cool.

–People had pride in their town. It was so well kept up and you could tell that most people loved living there.

So that was our small-town adventure… am I missing any key small-town points? haha