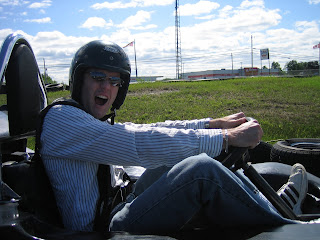 Four years ago today I put on a big white dress (and cute white sandals) and married my Hubster. There were no doubts, no second thoughts–just more love than I ever thought possible. In that moment I had no idea how our life would turn out, I only knew that I could no longer imagine life without him.

Someone once told me to treasure every day because they will fly by, but I had no just how quickly the years can pass. I honestly can’t believe that it’s already been four years–that’s like officially out of “newlywed” territory! We’re oldie-weds now! We’re off to enjoy a nice dinner together and then we’re going to see the most romantic movie of the year–District 9.

Are we romantic? haha

We both love action films and have been waiting for this film to come out for ages. So while it’s not Sleepless in Seattle (♥), we’re excited to go. :)

In honour of our 4 years of marriage, I want to tell you four things that I love about my Hubster. He’s only ever made one appearance as an author on my blog, so it’s really up to me to show you how fabulous I think he is.

1. He supports me through everything. While I’ve been unemployed this summer the Hubs has been wonderful in doing everything he can to help me find a job / help me not feel like a complete failure for not having one. After my nutso interview yesterday (after which I ended up in tears… there is a blog post coming) he arrived home with beautiful flowers and a huge hug. We both decided the company was stupid anyway. haha

2. He makes me laugh. I don’t know how anyone could survive life today without laughter… he is always doing something to get me to smile, and he has the most infectious laugh I’ve ever heard. He laughs with me, never at me (ok, maybe sometimes when I do something reeeally stupid… which is actually kinda often… hahhaha) and makes every day just a little bit brighter just because he was in it. I’d give you some examples of his craziness but I might get in trouble… haha!

3. He works so hard. My Hubs is not a giver-upper, and I’ve always admired that. When he has a problem or wants to learn to do something, he works and works until he figures it out. I’d get bored or give up, but not my Hubs! He worked so hard last winter to find a good job (in a good city… it’s equally important) and it paid off. We’re now happy as clams in our little home in Pretty City and he is doing very well at his grown-up job. When we went back for our graduations in June he was one of a handful of people in his class that had secured a good job in this crazy recession.

4. He brings out the best in me. Through our years of marriage he has taught me over and over again that if I’m not happy with something I don’t have to settle–I can change it. One of my biggest battles has been with my self-image, and over the years my confidence in myself has grown and now is he helping me with some changes I want to make to the outside. I’ve always been “afraid” of going to the gym, but he started going with me sporadically through the winter, and yesterday came with me to sign up for a membership so that we can go together. He believes in me, even when I have little belief in myself. He makes me feel beautiful, inside and out.

Now, I know he’s going to read this, look over at my desk (we share an office now) and tell me that I am the Queen of ‘Cheesiness’, but I don’t care. He secretly loves my cheesiness. ;)

I love you, Hubster… thank you for a wonderful 4 years. Here’s to year five!