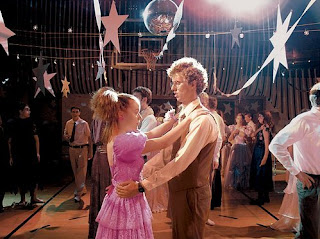 Last week I chaperoned my very first high school dance and it was an interesting experience. Busting a kid for trying to sneak booze into the dance was definitely the highlight of the night, although the music was also great and all the kids danced and had a great time so it was fun to watch.

Yesterday I got to see the flip side of the coin and chaperoned my first intermediate dance. Take a minute and think waaay back to your grade 7 and 8 days and reflect on your first “dance”… (Umm, yup, I couldn’t remember much either. haha)

All week I had seen posters covering the intermediate wing advertising the upcoming dance with a retro theme. This both excited and saddened me… I realized that “retro” for this group was childhood for me and I officially felt old. *sigh* I once made a reference to Jonathan Taylor Thomas to a group of grade 10 students and they had no idea who he was. I mean–really?! He was only the love of the 12-year-old version of myself’s life!

Anyway. So, I’m old now. However, I soon realized that as it’s a “retro” dance, a lot of the music would be my favourite songs from when I was younger, right?! HOO HAH!

I’m not sure if you remember, but typically intermediate dances are done during school hours and not in the evening, like high school dances. So this reeeeally narrowed the possibilities for sneaking alcohol into the dance. Oh, and they are all 12 or 13. Sooooooo… I figured the chances of my making another bust were significantly lower this time. Disappointing. haha!

I was a little disappointed when I arrived at school the morning of the dance to see very few retro outfits. I had one side-ponytail in my classroom, but that was about it. So, at lunch I slipped into the staff room for an hour of peace and quiet where I could read my current book (Freak the Mighty) in solitude. Nothing could have prepared me for the amount of spandex and neon colours I saw when I reentered the intermediate wing sixy minutes later. As I walked through the throngs of side pony tails and tight pants I was very impressed at how the kids had dressed up! I hadn’t even thought that they might be hiding their “costumes” (my former wardrobe) in their lockers.

Then the cutest thing ever happened. I stood in the hallway supervising students as they filtered down towards the dance. As the last few students trickled out I heard a little voice call me over to the entrance of the boy’s washroom. This is the conversation that ensured:

Me: “Sure! Is everything okay?”

Boy: “Did people gel their hair up… you know, in the 80’s?” (He then proceeded to whip out a massive bottle of hair gel from his pocket)

Me: “Well, I’d think so. Big hair was pretty popular.”

Boy: “But you don’t know, like, for sure? I don’t want to be embarrassed.”

Me: “I think that if you would like to gel your hair then you should absolutely go for it! The 80’s were all about individuality!”

…and then he walked away (whilst I, being the good teacher I am, waited an appropriate amount of time before bursting out laughing. haha).

I actually wasn’t scheduled to chaperone the first 40 minutes of the dance, so I missed out on the beginning to complete some lesson planning for next week. As my prep period ended, I hurried toward the dance excited to rock out to old music / give kids the “I’m watching you” eye as they left to get a drink (from the fountain… ha).

I arrived to Justin Timberlake’s “Sexy Back” and thought, “Ok, so they are mixing up newish songs with old ones. That’s cool.” Yeah… no. From there we moved on to Lady Gaga, Timbaland, Pussycat Dolls and some Britney Spears. All great songs–don’t get me wrong–it just wasn’t the Madonna, Blondie and Michael Jackson I expected to hear. The closest we got to retro music was a little Twisted Sister and some Village People. Now I understand that the DJ probably chose to play more modern music as people are more likely to dance to music they know, which would have been fine had actually dancing occurred. haha! I think from here on in intermediate dances should be called intermediate stand-arounds instead. For the girls, dancing involved some bopping at the knees and the occasional hand gesture (if it didn’t interfere with gossiping with friends about boys). The boys were much more active–dancing took on the form of chasing each other around the dance floor and pushing people over. We had to kick a few boys out for beating each other up, which they told us was just their way of dancing.

…and then a slow song came on. The second the beat changed it was like the parting of the red seas… all the girls moved to one side of the room, and the boys to the other. The girls stood there gossiping about those that had actually been asked to dance, while the boys sat on the floor in groups to make it as obvious as possible they they were too cool to dance with girls. (Oh boys, if only you knew that in two years you will love slow songs for the bum-grabbing opportunities they provide…) The few couples actually brave enough to tackle the middle of the floor and dance together were about as intimate as Napoleon and Deb up there. You could have fit a car between some of the couples I saw. haha!!

All in all it was a great dance. I only saw three bawling girls, two fights and there was NO puke. Best of all–it was done by 3pm. Oh intermediate dances, I heart you!