In my entire life, nothing has ever compared to the way I felt in those first few moments after the Hubster and I were pronounced husband and wife. After months of waiting it was finally real!

After taking a few moments to complete some paperwork, the Hubster and I made our way toward the front door where both of our families and friends were waiting outside. It was like being a mini-celebrity being chased by the paparazzi! Before we had even made it all the way through the doors pictures were being taken right left and center. “Look over here!” “Now here!” “Yoo hoo! Smile for the camera!”

Luckily my littlest brother was there to serenade us with beautiful guitar music to calm my nerves… as he started playing Stairway to Heaven outside the temple on his guitar he insisted on bringing. haha!

We were eventually able to clear the doors and our photographer took charge. We wanted to get through the photos as quickly as possible as, a) People wanted to go for lunch, b) we needed to drive back to B Town to finish getting ready for the reception, and c) I hate getting my picture taken. haha! (I have this bizarre lazy eye thing in photos… apparently my face finds it difficult to keep both eyes open at the same time… *sigh*).

It was nearly 1pm by the time we started taking photos, and my goal was to be finished by 2pm. As we got started it went off without a hitch (minus my lazy eye photo syndrome) and as we finished taking photos with families and friends people started leaving to make their way back for the reception a few hours later. Obviously the Hubster and I were there throughout and left a lot of our individual photos until the end so we wouldn’t inconvenience anyone else. 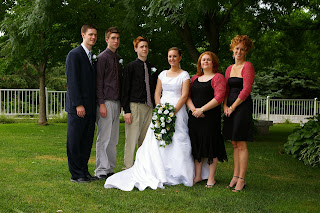 (All my siblings and I… Teep looks incredibly impressed. haha! He’s my youngest brother and the one standing right next to me) 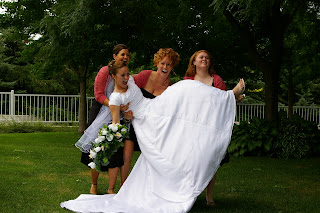 (My bridesmaids and I) 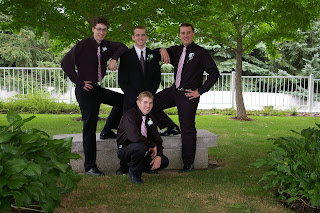 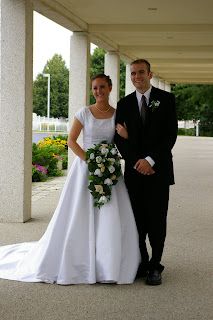 I’m not sure if you can tell from the pictures, but by mid-afternoon the sun had dipped back behind the clouds to make for a very humid, hot, overcast day. It was easily 30°C outside, and I’m pretty sure it was at least 50°C inside my beautiful (albeit heavy) wedding dress.

By 2pm or so all the group photos were done and it was just the Hubs and I left to shoot. The photographer wanted to take a few individual shots of us, and the Hubster’s turned out beautifully.

Then it was my turn.

Remember how I told you in my last post that I had neglected to eat breakfast in the midst of getting ready that morning? Never, ever forget breakfast. I had also forgotten about the whole
drinking water thing. Apparently these things are important. The photographer called me over and had me stand in front of a pretty setting and began giving me directions of how I could “pose”. As I stood there in the 30° heat and I looked at him, I thought “Gee, it’s a little odd that he is swaying back and forth…”

…and then I got reeeeeally dizzy and felt like I was going to be sick.

I can only imagine what the Hubster was thinking, as he had no idea that I had forgotten to eat or drink anything all day:

“Is she sick?”
“Is she having second thoughts?”
“Does marrying me really make her that nauseous?”

At that point we decided that the photo-taking was pretty much done and that I needed to eat something immediately. I did manage to pull my head out of my knees for one photo though! AND, you’ll be pleased to know–I did not throw up on my dress. :) 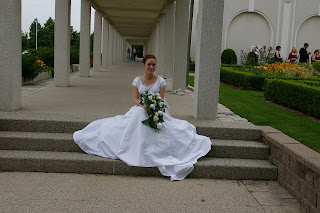 I sat in a collapsed heap of satin for a few more minutes before we piled everything into cars and headed back. As we had a drive of over an hour back home Big Dad and the Hubster decided that I needed to eat something right away, so the Hubster sped towards the nearest restaurant.

Lucky for him, it was a very classy place…

Yes folks, we went to McDonald’s on our wedding day. Luckily I had quickly changed out of my wedding dress into something more comfortable before getting into the car, though the Hubster was still in his suit. We decided to go in so we could sit down, much to the Hubster’s chagrin. (He was thrilled about being the best dressed man in there, let me tell you!) I got the only thing I felt appropriate for that most special day: a Happy Meal. :) 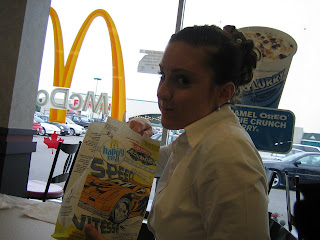 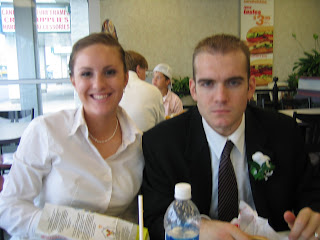 (He wasn’t really that angry… deep down he loves his McDonald’s.)

After finally having something to eat we piled back into the car and realized these were probably the only quiet moments we’d have together until after the reception. As the Hubster drove we talked quietly for a few minutes, then he turned on some soft music and I curled up in the seat beside him and fell asleep.

I needed to rest up… as the macerena, YMCA and chicken dance were on their way!