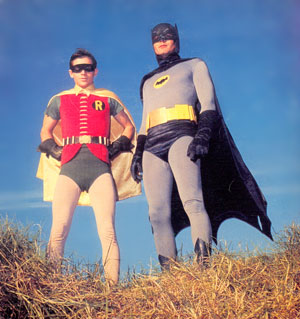 The Hubster and I were sitting in our little side pew waiting for the meeting to start when I saw something move from the corner of my eye. I looked up and saw what I thought was a bird flying near the ceiling. Then, as it swooped low over the heads of the congregation the old familiar theme began playing in my head and I thought,

…and that’s when the fun began.

Let me set up a picture for you: imagine sitting quietly listening to the prelude music as you wait for the service to start. People are talking quietly and the organ is playing softly. Suddenly that is broken by the screams of all the many old women as they realize that the pretty bird flying around the chapel is actually a bat. hahaha!

Women were diving for cover in their pews, terrified that Batman would land on their heads or worse–poop. Men stood up and tried to be manly and discussed how to remove the bat as it circled the chapel. Children pointed and watched amazed. The Hubster and I? We just laughed.

It was a hilarious scene… for about 2 minutes Batman circled the chapel, obviously frightened, while people screamed when it came near them. Finally some man stood up and started barking out instructions:

The stay quiet part lasted for, oh, a minute until the bat started tiring and began flying lower and lower until it was just over people’s heads… or at least the ones that weren’t glued to the floor or the pew bench. At this point people’s suggestions to remove the bat were hilarious:

“Let me go home and get my pellet gun. I’ll get rid of it. haha” (that was the Hubster, obviously. haha)
“Just get a baseball bat and whack it!”
“Anyone have a broom?”
“Just let it land somewhere.”
(in response) “Where? ON MY HEAD?”

…and there were many, many more. Finally, as the hero giving orders predicted, the bat swooped lower and saw the light coming from the hallway. He (or she, it could have been a fem-bat, who knows?) glided through the doors and out of the chapel, at which point an old man stood with his arms and legs spread apart blocking the doorway as apparently that would be more effective than, say, closing the doors? haha

Oh, t’was an exciting Sunday. The meeting began and the bat-men filed back into their seats with satisfied expressions that they had saved us folk from Batman.