I Heart My Shoes by Shop Girl* is licensed under a Creative Commons Attribution-No Derivative Works 2.5 Canada License.
**Have you voted in my poll yet?? ––>

I recently read a study in the Toronto Star about how redheads are less prominent in society that left me pondering: Are the days of the redhead numbered? Apparently it’s predicted that redheads could be “extinct” within 100 years as redheads are becoming less and less likely to marry another redhead.

Well, I guess it’s true. I come from a family of redheads. My hair is the least red of my women in my family–it’s more of an auburn colour with lots of red highlights–and I married a man with light brown hair. Peeah married a blonde. My mom married a brunette. So, so far our family is almost like living proof of this theory. Unless Spart marries a redhead we’ll be 0 / 4. And if I’m being completely honest, I’ve never even dated a redhead, or been attracted to one. Isn’t that weird?

I found out that there is actually a movement to try and reverse this trend. There are several websites for people who are attracted to redheads, and even a dating website called Redheadd.com whose motto is to “save the redheads” and is in place to connect redheads with other redheads. It is “the largest, most active, & reddest online community devoted to cheer leading a beautiful noble ratified and dying breed”.

Is there something about us that prevents us from being attracted to someone with the same fiery hair colour?

I just know it never worked for me (not that there aren’t many handsome redheaded men out there, it just wasn’t my thing).

So it left me wondering whether or not this was really possible–what would a world be like without redheads running around? No more kids with nicknames like “Ginger”, “Big Red” or “Rusty”?

I’ve been thinking lately that I’d like to be a bit more red. I’ve died my hair every color under the sun, but a dark red is the only (normal) colour I’ve never really done. I was a strawberry blonde for years before going a bit darker, but I’ve just kept my natural colour for the past year and a half. I was sort of reddish for a bit when I was 17 (see below) but I went back to blonde shortly after. 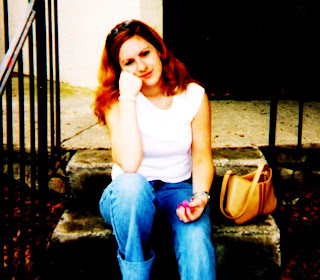 I think I kinda like it. If I decide to do it I’ll take some before and after pictures and keep you posted. ;)

This whole thing has made me think–what sort of people are you attracted to, or have you ever thought about it? I know I have Asian girlfriends who are only attracted to Caucasian men, or other girls who prefer to date men with dark hair. Many of my dark-haired guy friends love to date blonde women.

Who are you attracted to?