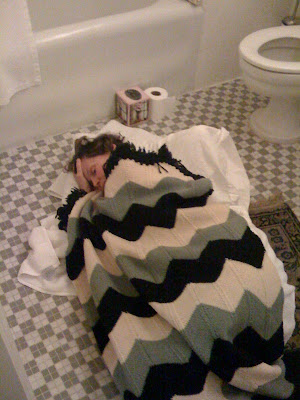 I hate being sick.

I actually started writing about my abhorrence for illness as I writhed in agony last night, but I was interrupted by another wave of sickness and abandoned the post. But let me back up a bit…

Yesterday the Hubs went to the City to see a guy about a job and to check out a job fair that was going on… so that left me with a big empty day by myself that I decided to fill. You would have been so proud of me yesterday… I got up early, spent only an hour with Edward, then went into warp speed. I cleaned the apartment, took apart a drawer that was driving me nuts, cleaned out my cupboards, scoured my kitchen and went to get groceries all before noon. WOO!

I then spent the afternoon readjusting my resume and began applying for work all over Ontario. I got through six applications yesterday, and it was really scary. I am terrified of the teaching interview process, but I’m going to suck it up and hopefully be awesome! I really need a job, so hopefully something will come out of this. There are a few more positions I’d like to apply for today as well.

Karog* came over as I was working to work on her resume and apply for jobs with me. For about 2 – 3 hours we both sat with our faces glued to our laptop screens and worked non-stop. Eventually we got hungry and decided we wanted sushi for dinner. We debated over where to go for a couple of minutes, then finally decided on a little place downtown that the Hubster had never been to. It’s actually a really neat little place–it’s very contemporary and the food is fabulous.

I’ve been there once before, and even though a couple of hours after eating there I had writhed in agony, I decided to try it again. When we went before Karog had given me all kinds of interesting food to try, and I assumed I had eaten something that didn’t agree with me. So I’d be fine this time, right? Right?

For the most part, I played it safe. Even though I am not a vegetarian, I prefer the veggie rolls (avocado & cucumber is my faaaavourite) and yam tempura is my love. So, I was all set to order my usual (which never ever makes me sick at our regular sushi spot) when at the last minute I decided to forgo my rolls to split some spicy chicken ones with the Hubster. I figured, no raw fish, so I should be fine this time, right? Right?

When the food came I was reeeeally excited to try everything. The spicy chicken rolls were not as fabulous as my regular veggie ones, but they were still really tasty and huge. They came topped with a spicy orange sauce. I ate until I couldn’t possibly eat any more, then we came back here to continue our productivity / allow Karog to steal our internet as hers wasn’t working (aren’t we nice people?).

She stayed until 11pm or so, then after a quick date with Edward I climbed into bed just before midnight, feeling fiiiiiine. The last time I had eaten there I’d felt sick within an hour of eating… I never actually got sick, but I was reaaally nauseous for a while (which I sometimes think is worse… I hate feeling like I’m going to throw up).

So just before I fell asleep my stomach did a little flip flop and felt a little weird, but it wasn’t anything strong enough to keep me awake and I fell peacefully asleep…

Anyway, after it was done I figured I was fine. You know how sometimes when you feel nauseous it’s better just to get it over and throw up with because you often feel fine immediately after? (well, I usually do anyway) So I brushed my teeth like 7 times and crept back into bed, managing to spare the Hubster the entire ordeal. I felt better, and was a bit relieved that it had only lasted 5 minutes and was now fine. I fell asleep.

…an hour later I woke up again and bonded with the bathroom floor once again as my body died. I don’t know if I have ever been sick like that… I couldn’t even drink water. It was awful. As I lay with my face pressed against the tiles I tried to think of what I could have possibly eaten both times to make me sick like this.

Confession: this happens with another sushi place as well… there are three good sushi spots in Senior’s City: S, H, & M. I have never, ever been sick after eating at S. It’s our favourite spot to go because it’s all you can eat and the food is fabulous. We’ve eaten at M a few times, and I have felt sick afterward almost every time. I’ve eaten at H twice, and have been sick both times.

So as I lay with my face pressed against the cool tiles of my bathroom floor (thank goodness I cleaned it on Friday) I racked my brain for what could possibly make me sick at two different restaurants. I’m fairly positive it can’t be food poisoning, but I’m not absolutely positive. The only thing I can think of is the spicy orange sauce–you know the one I’m talking about, they top spicy rolls with it… it kind of looks like cheese whiz. haha! M & H both use it. I looked it up this morning, and there is a type of smelt roe in the sauce, and I am wondering if I might be allergic to it. It’s all I can think of. *sigh*

Anyway, after an hour of imprinting the square tiles onto my face I decided to give bed another try. I quietly slipped back into the bedroom, thankful again that the Hubster had slept through everything, (even though I got in “trouble” for not waking him up this morning so he could help me… whoops haha) and after a while was able to fall asleep and stay that way until morning.

I feel better today, but I’m taking it pretty easy. I never, ever want to repeat last night. I have decided that I am only eating at the one sushi place, and it probably won’t be for a good long while. (Hellooooooo Canadian food… hi chicken fingers, please be my friend!)

But I still don’t know… could it be how they are preparing the food? It just seems bizarre that it would only happen at 2 of the 3 places I’ve been to, no?