The Hubster and I were taking the bus together somewhere last week when we heard a ticking sound… sort of like the sound you hear when you turn on your signals in a car. As we listened to the tick-tick-tick-tick of the mysterious bus sound, we were reminded of the time we heard a bomb in our apartment.

One night, many moons ago, the Hubster and I were enjoying a quiet evening at home. I was busy doing homework (Facebook) while the Hubster worked hard on a project (Team Fortress 2). I had some music on as I often do, but as I listened I realized that the beat was not right in the song I was listening to–it sounded like there was extra percussion. So, I paused the song only to realize the noise was not coming from the song at all. I heard a soft but distinctive tick-tick-tick-tick-ing coming from somewhere in my apartment… and then it stopped.

I thought to myself, “I must be absolutely crazy.” So I turned on my music again and returned to my studying (reading celebrity gossip). Shortly after I turned it back on I heard it again. Tick-tick-tick-tick… only it was longer this time. I rose from my chair to try and find the source of the sound, but as soon as my feet hit the floor it stopped again.

Now it’s important to note here that I have the biggest imagination ever. Rather than assuming that there would be a perfectly logical explanation for the tick-tick-tick-ing, I immediately jumped to the more reasonable explanation: there was a bomb in my house. (Apparently I watch too much CSI. Yup.)

“Should I get the Hubster?”
“What if I tell the Hubster and the sound doesn’t come back?”
“Am I crazy?”
“…IS THERE A BOMB IN MY HOUSE?”

…it was time to bring in reinforcements.

I ran into the bedroom (where the Hubster has his desk of gizmos and gadgets and all things electronically cool) and recounted the tale of the bomb tick-tick-tick-tick-ing to the Hubster. He was not as convinced as I was that we were about to be blown up, but he willingly offered to come and see what I was talking about.

It was like a deadly game of “Hot or Cold”. As we eliminated places the bomb could be the tick-tick-tick-tick-ing grew louder and louder… we tested clocks, kitchen timers, gadgets and gizmos. We tried the TV, VCR & DVD Player, even my trusty Super Nintendo was examined (thank goodness the bomb was not there!). Computers were shut off. Music was turned off. The hum of technology was silenced… all was still except the tick-tick-tick-tick-ing. Where could it be??

After an exhausting search we finally both stood in front of the Hubster’s grey shelves, waiting for the sound to begin again. I gripped the Hubster’s hand, ready to find the bomb and diffuse it (I’ve seen CSI–I’m qualified, right?). And then, there it was:

The sound was coming from the lower shelf.

…IN MY SCATTERGORIES GAME? This terrorist meant business–trying to blow up our favourite board game!!

As the Hubster gingerly pulled the box from the shelf the sound suddenly stopped. Had he triggered the bomb?

My heart was beating a million miles a minute as he slowly lifted the lid and the
TICK-TICK-TICK-TICK-ING
began again. And then–the lid was off!! The bomb was exposed!!

…and the Hubster started laughing as he lifted the small round timer from the box as it finished tick-tick-tick-tick-ing. Apparently I had not put the game away properly the last time we played. You see, the in the newer versions of Scattergories the timer is activated by simply pushing down on the top. If it is not placed in the box properly, nearly anything could set it off–something falling down and pressuring the lid of the box, thus pressing the timer, which in turn produces a lovely tick-tick-tick-tick-ing sound (which, in my defense, I still think sounds bomb-ish). In a hurry we had thrown the box into the Hubster’s grey shelves with books on top, which activated “the bomb” several days later. 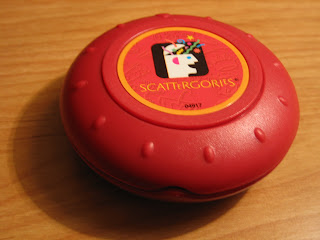 Note to self: pack board games away properly and you will not blow up.