After nearly a year of writing it’s finally here: The Wedding Day post. As I write it feels as though something is coming to an end… in reality, this post really signifies not en end, but a new beginning of our life together.

I last wrote about the night before our wedding. If you are just reading for the first time now, I have been writing out the story of how I met my Hubster-to-be at just 19 years of age and how we then dated, got engaged and married in less than eight months. You can read Our Story* in entirety by clicking on it to find out about our first date or how he proposed just two months after we met. In any case, it all lead to here…

When my alarm went off at 7:00am Telly flew out of bed and into the washroom. I slowly became aware of the commotion occurring upstairs, obviously signaling that I was not the first one awake. As I tried to register why Telly, who loves sleep like I do, would rush out of bed, or why anyone else in my family would be up so early on a Saturday, my foggy brain suddenly snapped:

I knew there were a hundred things I needed to be doing and that my hairdresser would be arriving momentarily to do my hair for me, but I also knew that this would probably be one of the only moments of the day that I would have for myself… so I lay in bed trying to imagine how this day would be. This day that little girls dream of, this day of all days–our wedding day. In five hours I’d be married.

Telly came back nearly dancing from the bathroom and pulled me out of bed. I snuck upstairs and was greeted with a big hug from my already very excited and stressed mother. She shooed me into the shower before the rest of my hulking little (big) brothers awoke and took all the hot water. Which they like to do. Often.

As I stepped out of the shower I heard the doorbell ring and I knew that my wonderful hairdresser had arrived and as of this moment it was going to get reeeeeally busy. When I came downstairs my hairdresser had transformed my laundry room into a salon and she ushered me into a chair as we were running on a tight schedule. I sent Telly upstairs to eat breakfast, and it never occurred to me to do the same myself.

Note to anyone getting married: never ever forget to eat on your wedding day. I’ll explain why later.

By around 8:15 my hair was done. As it was forecasted to be a hot overcast day with the possibility of rain, I wanted something that wouldn’t get messed if I was hit by a tornado. My hair is long and thick, so I wanted it all up off my neck.

Next I was pulled into the bathroom so Telly could make me beautiful. I don’t usually wear a ton of makeup (a little foundation, eye liner & mascara) but Telly (my esthetician/ maid of honor) opened her massive box of magic and went to work. When she finished, I felt like a different person (in a good way!). I somehow suddenly had a tan, huge beautiful eyelashes (more on this later) and felt like a princess with my pretty hair and make up. As she packed up I stood in front of a mirror (wearing my jogging pants and white collar-shirt) and put on my jewellery the whole thing suddenly felt so surreal…

By 9:15am my mom called me upstairs saying it was time to go. My dress, veil and shoes were packed in the car, along with all other emergency items (makeup, bobby pins, etc etc). Now then–I have a really big family, and my wedding ceremony was being held an hour away from my parent’s home in Btown. We all crowded in the front hallway trying to decide who was going in which car and who was driving. In the end, instead of driving down with my Mom and Big Dad (which would have been the wisest choice) Telly & I voted to drive down with Peeah & Fireman, who live about 25 minutes away from the Temple, assuming they would know the area pretty well. As Big Dad gave everyone last minute directions and asked if everyone knew how to get there, everyone nodded yes and we piled into cars–my dress in one car, and I in the other.

It was now just after 9:30am. As we pulled out of the driveway we had about an hour and a half to get down to the temple… which should have put us in good time. As the bride, it was required that I be there at 11:00am to meet with The Hubster and complete some last minute things before we could be married. I thought it would be lots of time, right?

As we slipped onto the highway Peeah and Telly talked animatedly while I listened quietly. I kept waiting to feel nervous, as everyone had expected me to. In fact, Peeah and Telly asked me repeatedly in the car if I was “nervous yet”, but I just felt really calm and relaxed. I felt so relaxed that I fell asleep. On the way to my wedding. Yup. :)

I woke up as we turned off the highway toward the Temple, the way we always go–and the only way the four of us in the car knew how to get there. It was now 10:40, and without any interruptions we would arrive there just on time. That was when we started seeing orange construction signs. Lots of them. But that was ok… so long as the road was open I didn’t care how many orange signs I saw.

…and that was when I saw the man in the construction hat and vest holding a huge sign that read:

Fireman pulled up beside the construction man for a quick chat. The construction man informed us that the entire road was closed, and that we would need to take an alternate round-about way to the temple. Unfortunately, the man was not from that city and could not give us directions. He merely pointed in the general direction other cars had headed and wished us luck.

10:47am – We begin driving in what we hope to be the direction of the temple.

10:52am – We realized that we have no idea where we are and frantically begin calling Big Dad’s cellphone for directions. (This was the pre-GPS era).

The Hubster will think I’ve had cold feet!! He’s going to think I’m not coming!!

11:01am – I am not at the temple. We are still driving aimlessly through the back roads of a city which none of us know well.

11:07am – We finally get directions and realize we are going absolutely the wrong way.

11:19am – We arrive at the temple…twenty minutes behind schedule.

Meanwhile…
While we were on our “adventure drive” / trying to find a way to get to the temple, the Hubster was much better organized and prepared and arrived early. Minutes ticked by as he sat in the waiting room with family as our guests began to arrive. When 11:00am passed he thought maybe I was running late. By 11:15 he was just a wee bit concerned that maybe I had had cold feet. The constant questions about where I was, combined with Big Dad’s running jokes about why I wasn’t there (no doubt to ease the tension), were not much help. Unfortunately, as the Hubster was in the temple, his cell phone was turned off and I had no way to reach him to ensure him that I was on my way and that he was still going to be stuck with me for eternity!

When we finally pulled into the parking lot, Big Dad came running out of the temple with a concerned / stressed expression on his face. I was ushered (running) from the parking lot to the temple, leaving Telly and Peeah to grab all my things and follow behind me. Big Dad quickly helped me get organized and brought me to the Hubster, who sat quietly in a chair wearing a nervous expression. As I rushed toward him apologizing over and over he looked up, smiled and pulled me into a tight hug. We were then completed some paperwork and went our separate ways to get ready.

I’m getting married in 15 minutes.

As my mom helped me get ready in the bridal room all the stress of the car adventure slowly melted away. As we stood together in the mirror I still couldn’t believe that it was finally here.

I’m getting married in 5 minutes!!!

We walked toward the room where the Hubster was waiting with our family and friends. As he stood waiting for me his eyes shone and I was overwhelmed with happiness: I’m going to married this man for time and all eternity.

As we held hands and looked into each others eyes it felt like time stopped, if just for a second. We were given some wonderful advice to begin our lives together as a married couple–a family. Our family.

…and then, it was over. We slipped rings onto each other’s hands and I was no longer Single Shop Girl–we were married… and I became the Wifester. :) As we stood holding hands amidst all the love and congratulations from our family it finally felt real… I could never remember feeling so happy.

I just got married to the man of my dreams!!!! 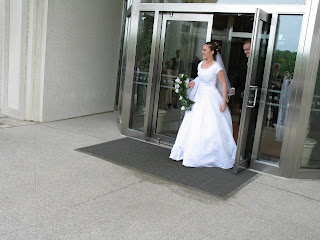 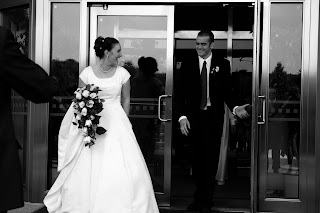 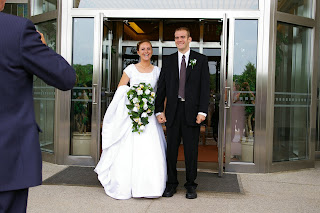 P.p.s. Stay tuned for more photos and details of the wedding reception!