Information about us, idea stolen from Robin!! 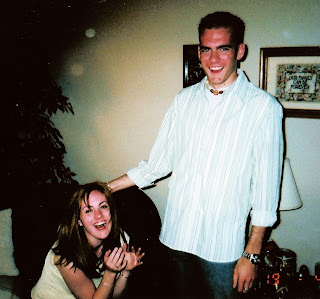 How did we meet? I knew his best friend first… and one night, the Hubs was there with him and the minute I saw him I couldn’t take my eyes off him. Too Kool introduced us, and after a few weeks of chasing him down he finally asked me out… but you already know all about that! haha

Where did you go on your first date? To Swiss Chalet. He knew that I didn’t really like red meat, so he took me somewhere that had plenty of white meat options. How cute is he? Afterwards we went to a dance, and then watched a movie at my house. It was fabulous.

How long have you been together? We’ve been married for just over 3, but it’ll be 4 years together in January. Man, that went so fast…

Who said I love you first? He did.. about 2 weeks after our first date. haha! I said it right back though, I knew pretty much the first time I saw him that he was it for me!

Who is taller? Definately the Hubster. I’m a little bit vertically challenged.

Who sings better? Um, he’d probably say that I do. I’ve been singing since I was little so I kind of had an advantage there. Although, he does sing me glorious songs quite often… he writes better ones than I do. haha!

Who does the laundry? We tag team this one… I usually sort it, and then he’ll come down with me to help me get it started (I usually leave it and do like 100 loads a time haha) and then he or I will switch it and fold it.

Who does the dishes? Probably the Hubster… I do most of the cooking, so he is really great to help me out with the dishes.

Who sleeps on the right side of the bed? That would be me! I don’t know why… it’s just my spot. I heart it.

Who pays the bills? The Hubs is my bill-man.

Who mows the lawn? We don’t have one… but we’d both probably do this. I don’t mind out-doorsy stuff!

Who cooks dinner? I usually do, but the Hubs has really been taking over this department since I started TC! He’s a wonderful cook.

Who drives when you are together? We don’t own a car at present (SOON THOUGH!!) but in the past the Hubs usually did / does.

Who is more stubborn? I don’t know… maybe me, maybe him. Maybe we’re even? I don’t think this is really an issue for us though.

Who kissed who first? He kissed me… and I kissed back. haha

Who is more sensitive? Probably me… sometimes I just need a good cry. *sigh* haha

Who has more siblings? Moi… me and my big tribe—3 brothers and 2 sisters.

Who wears the pants? We are both wearing pants… although I wish mine were jammies. (I HATE this statement… we love each other and do things together though.)